Just days before Christmas, Nightwish unveils the title of their 8th studio album as a present for their fans, along with the release date and the cover artwork. The upcoming album is named Endless Forms Most Beautiful and it features eleven new songs. The band gives us some insight about the name choice:

Charles Darwin, The Origin Of Species: [gdlr_quote align=”center” ]There is grandeur in this view of life, with its several powers, having been originally breathed into a few forms or into one; and that, whilst this planet has gone cycling on according to the fixed law of gravity, from so simple a beginning endless forms most beautiful and most wonderful have been, and are being, evolved.[/gdlr_quote]

Tuomas Holopainen adds  [gdlr_quote align=”center” ]This classic quote is where it all began. We set sail for the ultimate journey in March 2015, join us![/gdlr_quote]

The cover of the album was created by their longtime collaborator Toxic Angel and you can find it below. 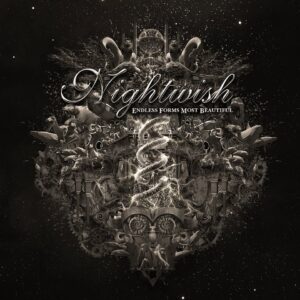 Endless Forms Most Beautiful will be released on March 27th (Europe), March 30th (UK) and March 31st (US) via Nuclear Blast Records and it will be available in these formats:

Pre-Order the CD Élan from Amazon: