Tiamat is an iconic gothic metal band that became famous with the release of the album “Wildhoney” in 1994; twenty years later, its frontman Johan Edlund announced his departure from the band, due to his health, and many believed it to be the end of the band.

But life is full of changes, and the singer/guitarist Johan has recently wrote on the official Facebook page of Tiamat a message where he explains the reasons behind his departure and announces his return in the band.

Friends. Last year, in a moment of doubt, I said I would leave Tiamat. My father had just passed away and I took that for a reason to drink. Drinking was more important than mourning.

My heart stopped beating six times last year, and.. I’m not even happy to be alive. I’ve been through all the pits of Hell you don’t wanna know.

But what matters.. Is that through out of all this.. There are REAL friends, backing you up.

In a moment of doubt, I decided to leave the band. I had seizure and had just been hospitalized for delirium and stroke.

That was news to my good old friend Borivoj’s Blabbermouth, and the like, of course.

Wish you, dear friends will help us spread the word that is Tiamat. Yes, we’re back & Yes, we’re working on a new album. That’s no news for gossip, that’s why I write it here 🙂 When we stand up, no one seems to care?

Now off to tattoo something. Anything I can afford. Or I do it myself.

Download our albums for free, but always feel welcome to come to our shows!

If you respect us, we will always be there for you!

Thank you so much!!!

Johan and Roger have started to work on new songs and we hope that soon we’ll have more news about the release of a new Tiamat album. 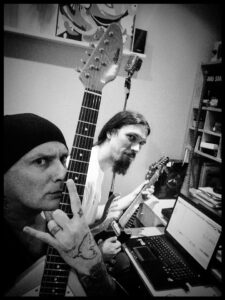