Last week we started our trip Down the Rabbit Hole on the topic of Time Travel, covering the sci-fi, theories and hoaxes.

Now, in the concluding part, we talk about the science behind the idea of time travel. 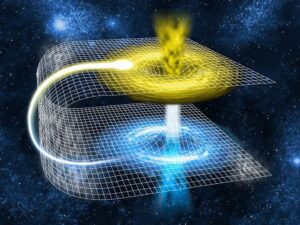 We start the show discussing some of the basics, like Albert Einstein’s Relativity Theory but don’t panic, we talk about it in very simple terms – we are not scientists!. Einstein developed his famous equation E=MC2 in the early part of the 20th Century that, when re-arranged for C (velocity), shows that as you accelerate an object, the amount of energy needed increases exponentially, as does the mass (M). So, if the speed of light could be reached, the mass of the object and the energy required to get it there would be infinite. As these velocities are approached weird things also start happening to time. This is the basic reason behind the currently accepted position of physicists that reaching the speed of light is not possible, at least by conventional means.

But it was only later in the Century that experiments were able to be done using atomic clocks, which are based on the vibration of atoms, that attempted to test Einstein’s theories about time. We talk about two of those experiments that showed that Einstein’s prediction of ‘time dilation’ was actually happening. Time dilation is a side effect of velocity and becomes more significant as speed increases to the point where, as you approach the speed of light, time will slow down and ultimately stop. In fact Einstein said that if the speed of light could be exceeded time would start to flow backwards – this would obviously cause all kinds of problems if it were possible!

Another time dilation measurement was done with the Russian Astronaut Sergei Avdeyev, who stayed in space for 747 days aboard the now defunct Mir space laboratory travelling at around 27000 km/hr. Calculations, using Einstein’s equations, showed that Avdeyev was 1/50th of a second younger than us earthbound humans.

We followed this segment with a bit about the world renowned theoretical physicist Kip S. Thorne and his ideas about wormholes and negative mass. 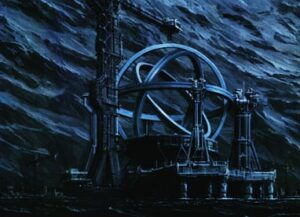 Thorne is known for his contributions to gravitational physics and astrophysics. A long time friend and colleague of Stephen Hawking and Carl Sagan, he was the Feynman Professor of Theoretical Physics at the California Institute of Technology (Caltech) until 2009 and is one of the world’s leading experts on the astrophysical implications of Einstein’s general theory of relativity. He was the technical advisor for the movies Contact and more recently Interstellar where his theories about wormholes (also called Einstein-Rosen bridges) were put on the screen. In the movies two wormholes form a ‘space-fold’ between vastly separate points in space effectively allowing travellers to bypass Einstein’s speed-of-light limit and as a side effect leads to effective time travel.

Even the Augmented Reality game, Ingress, was mentioned as a reference to the Exotic matter involved in making these space-folds work!

Let us know what you think or believe, is time travel possible or not? If it was what would you use it for?

For you readers out there Physicist Paul Davis has a very interesting book – How To Build a Time Machine – This is a Down The Rabbit Hole recommended read and we would be very interested to hear from anybody who built one after reading it!.
Finally, are you a time traveler or time tourist? Or perhaps you know one? If so we would love to hear from you via our comments section. You could tell us what you think of our time period or just say hi!